ITS CENTRAL LOCATION MEANS THAT IT IS POSSIBLE TO REACH TO FURTHEST
POINT OF THE PELOPONNESE PENINSULA AND RETURN AS A DAY TRIP. 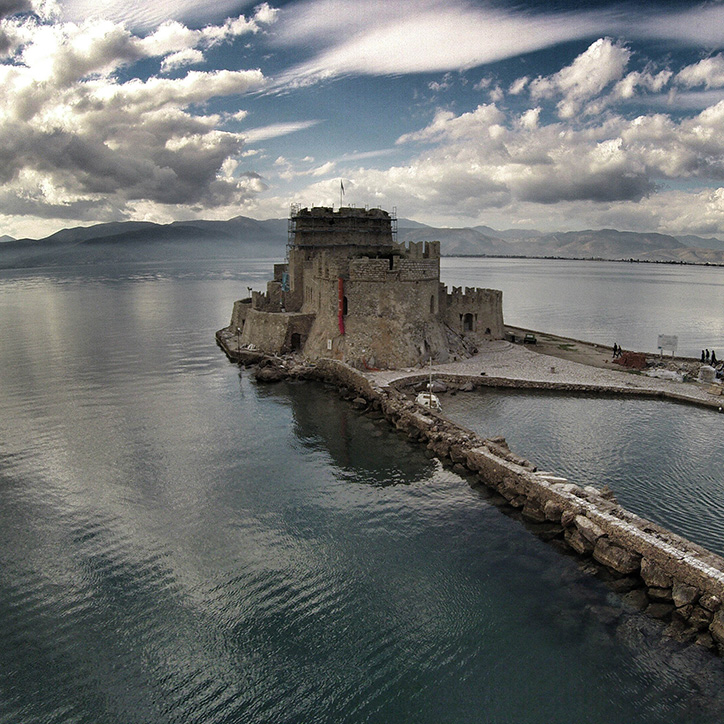 Castello dello Soglio was the first name of the Venetian castle, which along with Palamidi, is considered one of the landmarks of Nafplio. Nevertheless, the name that finally prevailed is Bourtzi, which in Turkish means «Island–Fort». 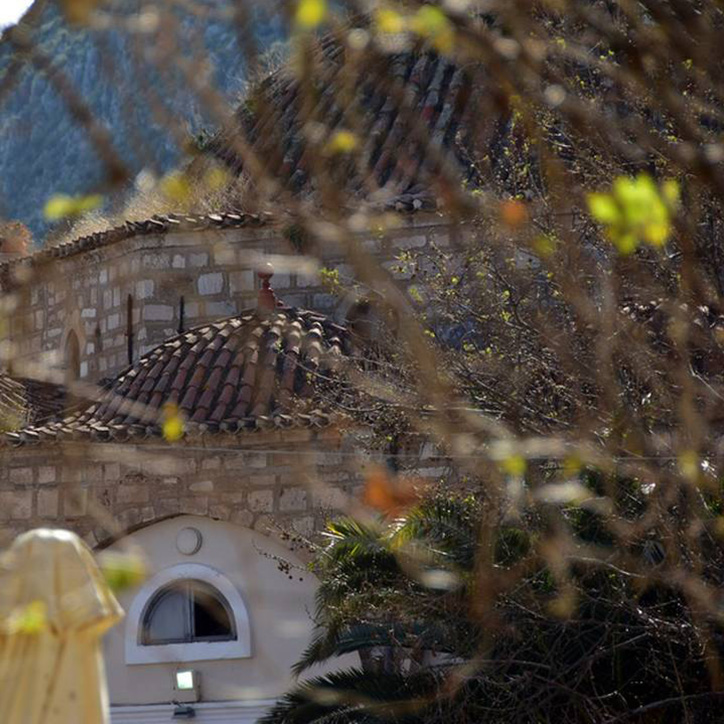 One of the oldest surviving buildings from the period of the first Ottoman domination, is the Old Tzami (Mosque), which adorns the center of the city of Nafplio. The beautiful building is located in the Syntagma Square. 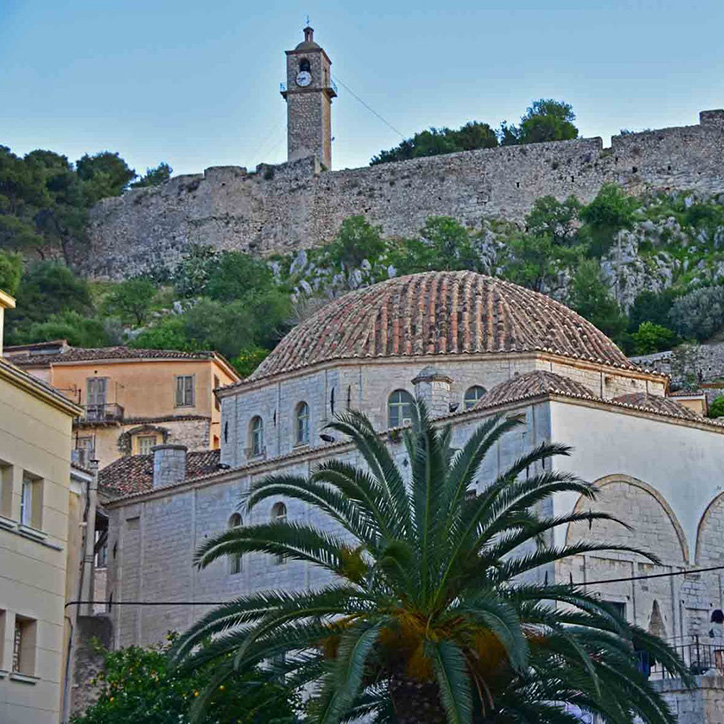 Vouleytiko took its name because here was the first Greek parliament (Vouli in Greek). From autumn 1825 until spring 1826, Vouleytiko, which had been formed in the meantime by the architect Vallianos, housed the Greek Parliament. 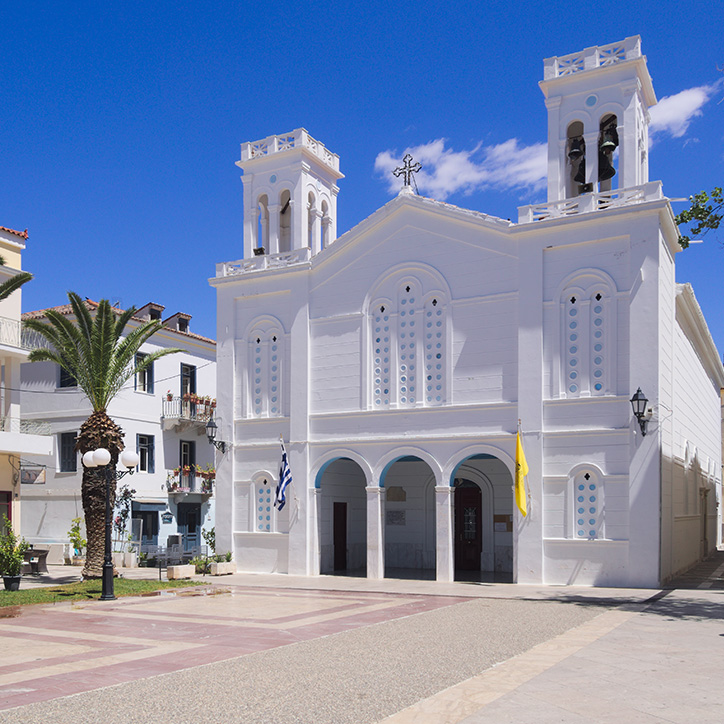 A stroll around the old quarters of Nafplion reveals images and religious monuments that are part from the historical past of the town. Among them you will meet the holy church of Agios Spyridonas.

Inhabited since antiquity and ruled by Byzantines, Franks, Venetians and Turks, Nafplio’s history is just as colourful and varied as its many charming buildings. It was the Venetians who undoubtedly left the most impressionable mark, seen in the city’s architecture and layout. They were also responsible for the construction of the Palamidi Fortress, which later fell to the Turks.

Just a short walk from the town, the beach is rocky and is known by the locals as the “town beach” where many locals pop around for a quick dip.. again the water is pristine and although rocky it is favoured by many. Quieter than Karathona (except for July & August) it is a convenient beach for a great swim and sunbathe. Quite a few steps so really suitable for people with wheelchairs or walking difficulties.

Nafplion’s main beach is called Karathona. It is a few minutes by car or by local bus during the Summer months from Isioni Pension and it is a Blue Flag beach. The beach follows the horse-shoe shaped bay around the coast making it sheltered and fairly shallow. It is ideal for a day at the beach and is well organised with a number of bars and cafeterias placed at intervals offering a great range of drinks and snacks and patrons are able to use the sunbeds and chairs free of charge. There is plenty of free space to put down your towel and enjoy the sand. Water sports are available here with or without tuition.

Arvanitia beach is a popular beach Nafplio. Spreads below Palamidi and is a cool and beautiful beach ideal for swimming and leisure time.It is relatively small, and the length is about 200 meters. The crystal clear waters oms always awarded the Blue Flag. Attracts the attention of bathers as they are functional and offer all the amenities of swimming enthusiasts. So named, when the Turks in 1770 pulled down from there with thousands of Albanians who intentionally did not obey the Sultan.

Nafplio’s old Lido is close to the old town, very handy if you have a hotel nearby and just want a dip or do some serious swimming. Quite deep, so this is not where you bring young kids, but it’s a beautiful little spot, and there’s even lovely a bar, Omilos, there, and a great place to eat, Agnanti. So close to the old town, but so peaceful! And the added bonus of a view to Bourtzi and the walls of Acronafplia. Follow Akti Miaouli, passing the lighthouse and walk a few metres on the path around Akronafplia, and you are there.

The resort town Tolo, 9 km from Nafplio, has an almost endless and well-organized sandy beach, with a wealth of sun loungers / parasols, taverns and cafes. You get here by simply taking the bus from Nafplio, which runs several times a day.  Quite often, a whole lot of people will be at this beach, because there are a plethora of hotels and campsites nearby. Come quite early summer weekends if you want a good spot!

A living ancient theatre, a one-of-a-kind archaeological site and the famous Asclepius of antiquity – all within a natural landscape that makes for an ideal beach and culture holiday. You are in the Peloponnese, in the concave of the ancient theatre of Epidaurus. On the upper tier of the ancient theatre you’ll gaze, entranced, at the horizon. Peace, tranquility. You’ll understand immediately why the ancients chose this place to construct the most famous Asclepion, or holistic healing centre. Take a deep breath and look around: the grandstand, seats, orchestra and elongated stage-building.

Mycenae is an important archaeological site in Greece which was once the city at the centre of the Mycenaean civilisation of between 1600BC and 1100BC. Believed to have been inhabited since Neolithic times, Mycenae flourished into a fortified city and was ruled at one time by the famous King Agamemnon. At its peak, Mycenae was one of the most important Ancient Greek cities and is linked to several works of cultural significance, including the Odyssey and the Iliad. Today, Mycenae contains several well-preserved sites, including the Lion’s Gate and the North Gate, which form parts of its fortified walls and which once stood 18 metres high and 6 to 8 metres thick.

Nafplio was the first capital of Greece during its recent history. It attracts a great number of tourists every year. The Medieval castles, the neoclassical buildings as well as the alleys paved with stone and full of vougainvilleas create a marvelous spectacle and reveal the city’s long history. According to Greek mythology, Nafplio was named after the son of Poseidon and Amimoni. Archeological research has revealed that Nafplio has been inhabited even since the Premycenaean period.One of the most beautiful towns in the area of Argolis (in eastern Peloponnese) as well as one of the most romantic cities all over Greece, Nafplio was the first capital of the newly born Greek state between 1823 and 1834.

According to mythology, the town was founded by Náfplios, the son of god Poseidon and the daughter of Danaus (Danaida) Anymone. The town’s history traces back to the prehistoric era when soldiers from here participated in the Argonautic expedition and the Trojan War alike. The town declined during the Roman times and flourished again during the Byzantine times. Frankish, Venetian and Turkish conquerors left their mark in the town and strongly influenced its culture, architecture and traditions during the centuries. Ancient walls, medieval castles, monuments and statues, Ottoman fountains and Venetian or neoclassical buildings mesmerize the visitor with their unique architecture and beauty.